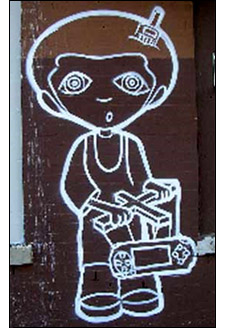 The Christmas season has just ended and I just realized how BIG gaming consoles are for children. We spent Christmas Eve and Christmas Day with my extended family and I was really surprised to see that most of the kids had a gaming console with them – the portable ones!

Don’t get me wrong – I have nothing against gaming consoles. In fact, I kind of like the PlayStation Portable (PSP), which my husband got for himself when it first came out. Aside from the price, I think that this gadget is quite nifty – you can do more than play games.

The dilemma I have been having is how old should a child be before he or she could get a gaming console? More so, what kind of console is right for a certain age? Take my nephew, he is only 5 and his parents bought him a PSP. I think it’s too expensive a toy for his age.

My other nephew got a Gameboy Advance and he’s 7. I think that’s a better match. Then again, he felt so envious of the PSP, which a younger cousin already has!

As a parent, it could be quite hard to make the right decisions – should you get your child a gaming console? If so, which one? More than that, how do you handle their use of the console?

I believe that it boils down to more than the game or toy itself. It is part of disciplining your children and giving them what they want at the same time. Good parenting includes treats and teaching children control at the same time.