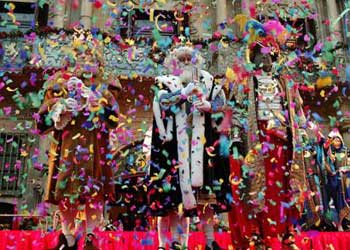 I hadn’t realized that the day of The Three Kings was so unknown in America (at least not in the non-Latino communities)and England, both of which are the cultures from my husband’s side of the family. And so, the o.c Mom that I am, I dug up some more on the three kings to share with my husband and kids (they should know why their shoes are getting filled with candy, dont you think?, and now my blog too…. next I’ll be reporting how the big festivities went.

Los Tres Reyes Magos literally means “The Three King Wizards”, but is usually interpreted to mean “The Three Wise Men” or “The Three Kings”. Their celebration day (January 6th) is refered to as “Three Kings Day” or just “The Day of the Kings”.

In Spanish tradition, on the day of January 6th, three of the Kings: Melchor, Gaspar, and Balthazar, representing Europe, Arabia, and Africa, arrived on horse, camel and elephant, bringing respectively gold, frankincense and myrrh to the baby Jesus twelve days after his birth.

As such in Spain, this is the day that people give and receive gifts. And as children in the United States and other countries might wait with great anticipation the arrival of Santa Claus, in Spain the children await the arrival of the Three Kings.

On January 5th in most Spanish towns is the “la cabalgata” (the calvacade) which is a parade marking the arrival of the Three Kings. The Three Kings ride on floats throwing candy to the children. In the Canary and Balaeric Islands the Three Kings arrive by ship!

And for my history-buff husband, heres what I’ll be telling him about the Feast of the Epiphany:

Epiphany (Greek: ?????????, “the appearance; miraculous phenomenon”) is a Christian feast intended to celebrate the ‘shining forth’ or revelation of God to mankind in human form, in the person of Jesus. The observance had its origins in the eastern Christian churches, and included the birth of Jesus; the visit of the Magi, or Wise Men (traditionally named Gaspar, Melchior and Balthasar) who arrived in Bethlehem; and all of Jesus’ childhood events, up to his baptism in the Jordan by John the Baptist. The date of the feast was fixed on January 6. Ancient Liturgies speak of Illuminatio, Manifestatio, Declaratio (Lighting, Manifestation, Declaration); cf. St. Matthew’s Gospel (iii, 13¢17); St. Luke’s (iii, 22); and St. John’s (ii, 1¢11); where the Baptism and Marriage at Cana are dwelt upon. The Christian Churches have traditionally also talked of a “Revelation to the Gentiles”, where the term Gentile meant all non-Jewish peoples. The Biblical Magi represent the non-Jewish peoples of the world.