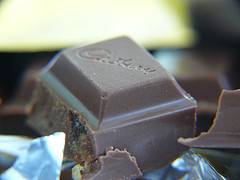 When a woman gets pregnant, she gets cravings for the weirdest things. She just can’t help it. She feels the urge and she has to have it. Some people may never understand just what goes on during those times but WE know that those cravings are hard to resist.

Lucky for those women whose cravings lean towards that thick, creamy, brown bar of goodness called chocolate! Dr. Elizabeth Triche from Yale University and her group of researches have recently concluded a study wherein it was found that chocolate is GOOD for pregnant women.

The rationale behind this conclusion is that dark chocolate contains theobromine, a chemical that works in the following ways:

So what do these effects have to do with pregnancy? There is a condition called pre-eclampsia, which is actually a major concern for pregnant women. Though only about 8% get pre-eclampsia, those who do experience the complication also experience cardiovascular problems.

This is where chocolate comes in! The study found out that the women who consumed the most amount of chocolate and had the highest amount of theobromine in their blood were least likely to develop the complication. The catch? None, really, unless you do not like dark chocolate. This is because not all chocolates are the same. The milk chocolates and the extremely sweetened kinds will not have the same theobromine content. As such, they may not bring about the same benefits. More so, because of the high sugar content, it might bring about other complications.

So load up on that dark chocolate!