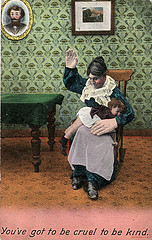 I guess you’ve had enough of me pointing out where us parents could go wrong, huh? It is good to reminded every now and then though, isn’t it? So anyhow, I think that for the last entry in this series, I’d focus on one controversial issue: punishing children.

In her article, Nancy Shute says:

Although spanking has been deplored by child-development experts since the days of Dr. Spock in the 1940s, as many as 90 percent of parents think it’s ok to spank young children, according to research by Murray Straus, a professor of sociology at the University of New Hampshire. Kazdin and other behavioral researchers say parents commonly punish far more harshly than they need to.

To her credit, she does not totally rule out the need for physical discipline. She just suggests that there are other ways to discipline aside from spanking. I totally agree with her about the idea that “finding bigger sticks” may not be the best course to take. After all, if you spank your child and he does not respond positively, how would a harsher (physical) punishment be any different?

I like the idea of timeouts. In my experience, this works well for young kids. The article suggests:

Discipline works best when it’s immediate, mild, and brief, because it’s then associated with the transgression and doesn’t breed more anger and resentment. A timeout should last for just a few minutes, usually one minute for each year of age of the child.