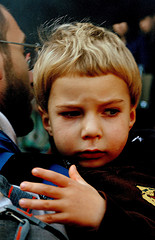 Just like many families who didn’t go out of the city over the Easter weekend, we found ourselves at the mall on Saturday. It was not one of the most perfect times to go as there were throngs of people but we still found ourselves enjoying each other’s company and the sights to see. That was, until our little boy started throwing a fit because he wanted some Coke before dinner. Of course, mommy said no – he can have a glass after the meal. It would have been fine except that an uncle went ahead and bought himself a can. Little boy then started whining and comparing his uncle.

So how did we handle this? The way we usually do it is to give calm explanations. Children are quite rational if you get them used to it from the outset. Yesterday, though, it didn’t work immediately. Little boy kept whining and asking for a Coke. I decided to ignore him. After a while it stopped and we had dinner in peace – with two glasses of Coke afterwards.

Did I do the right thing? Should we ignore our children’s bad behavior? Tammy Daniele in Parenting Coach suggests doing so. However, she emphasizes that we should not ignore the CHILD but ignore the BEHAVIOR instead. She goes on to say that: A simple statement that sends the message that you, as a parent, are not going to respond to certain behaviors and will not respond until a more suitable behavior is being displayed.

I totally agree. How about you?