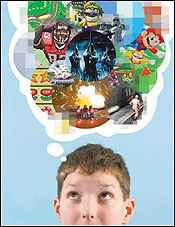 I’ve never been into video games, which probably explains why I’ve always told N that she wouldnt be allowed a Gameboy or the like until she was 10 years old. So imagine my annoyance when at the family Christmas get-together, my 11-year-old half sister (who N adores) lent N her Gameboy, and N was entranced, showing that she clearly had some talent despite being only 5-years-old.

Then a few days ago, her friend Rose (as mentioned in the previous post) brings the latest Gameboy to school, which was a present for her birthday. It was the envy of all the kids at school, especially N. Noticing this when I picked her up from school that day, I gently (but firmly) reminded her that she wasnt getting one until she was 10. She was very-grown up about it, as if resigned to her fate….

Now feeling guilty, I spoke to my husband about it (who, has been desperate for N to be old enough to play video games with him, a hobby he gave up when we had the kids). He said that if we had a “big one” (i.e. something he can play too) at the beach house, which she can only play on weekends or holidays, then MAYBE we can bend this rule a bit. Hmmmmmmm…….

The jury’s not out on thus, but I didn find an interesting article about ways parents can make video games “good” for kids, which I’ll be blogging about next.