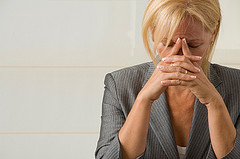 There seemed to be a time when a woman was expected to give up her job the moment she got married and/or she gave birth. The norm back in the day was for the woman to stay at home. In the past decades, however, more and more women have started to get careers of their own – some even surpassing their husbands in this area.

This was considered by many feminist groups as a victory for their side. The woman has been empowered and has shown that she can have a successful (career) life of her own and have a family as well.

An article that I read on ABC raises some questions, however. The premise of the article is that with women who are successful in their chosen career paths, the trend is for them to put off marriage or having children. The article states:

A new study from Washington & Lee University shows professional women are walking away from motherhood and marriage — more than the general population.

She says, while four-fifths of senior male lawyers have children, only two-thirds of senior women do, and there is a similar break from marriage.

She looked at more than 100,000 people with at least a college degree, and found that women lawyers, doctors and MBA’s are opting out of marriage at a higher rate than their male counterparts. When they do marry, women professionals have a harder time making it last.

Numbers don’t lie. But the results of the study do not have to be true for all cases. I believe that a woman can be a successful career woman and a good wife and mother all at the same time, don’t you?