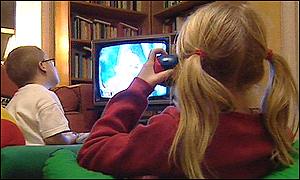 I’ll probably get throttled for saying this, but now with the backing of the esteemed American Academy of Pediatrics, I can finally admit that I let my kids watch copious amounts of tv, and that I believe that if the right programmes are chosen, it actually does them good. Of course it doesnt beat an afternoon of playing make-believe in the backyard, but you know what I mean.

I’m talking about Barney, Sesame Street, Blues Clues, Dora, and the like, which teach a lot of good stuff they wouldnt learn at home (especially if they don’t go to school yet)- and not some of the awful stuff tweens and teens get on Nickelodeon and Disney. My 4 year-old unfortunately is amused by the likes of Zach and Cody and High School Musical, which I don’t really mind too much. Its Sponge Bob’s less-than-respectable language and shows like “All That” which have kids pouring down coffee and white sugar down their throats while they act absolutely horrifying – are what makes me shudder.

So back to this startling piece of news, which I share with you here:

SEATTLE, November 6: A new study published today in the November issue of Pediatrics, the official journal of the American Academy of Pediatrics, has found that educational television programs can be beneficial to toddlers and preschoolers in broadening their knowledge, affecting their racial attitudes and enhancing their creativity.

The report looked at 12 studies conducted between 1973 and 2000 focused specifically on television content viewed by children under the age of 6 and its impact on learning, racial preference, aggression, pro-social behavior, self-regulation and imagination.

The research found that there is evidence to suggest that educational television programs, such as Sesame Street and Mister Rogers, can aid in the acquisition of general knowledge plus improve overall cognitive knowledge among young children. There is also evidence in the literature that children’s imaginative play can be positively affected by television content. Furthermore, educational television programming that emphasizes diversity can improve children’s racial attitudes.

“The bottom line is that content is key—high-quality educational programming can have a positive effect on children under age 6,” said Dr. Dimitri Christakis, a pediatrician at Children’s Hospital and Regional Medical Center in Seattle. “However, much more research is needed. It was disappointing that there are so few rigorous controlled trials of something that is so important and so prevalent.”

However, there was also evidence that television viewing can increase a child’s display of aggression.

“This is a good start, but more research is needed on the impact of television viewing and content on infants and young children,” added Christakis. “Especially as the infant video and cable television markets are exploding, we should be carefully monitoring whether or not these products meet their claims to improve a child’s intelligence, language acquisition and pro-social behaviors. At this point, we should continue to be cautious about the amount and type of television we let our kids watch.”