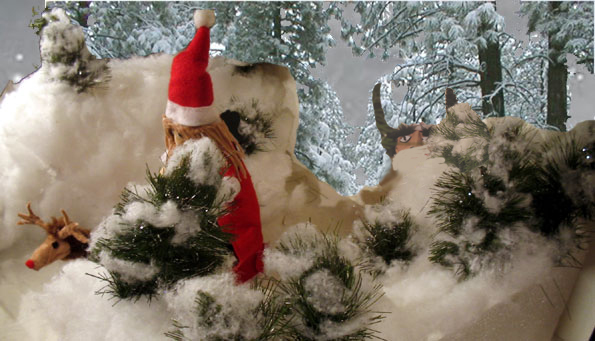 I don’t know if it’s because of the Christmas excitement – with all the shopping, wrapping, baking and school activities, but my children have become increasingly naughty, and that even includes little Wills, who has been waking up every 1 a.m and refusing to sleep for a full hour.

So in my battle weary Christmas frustration, I was thrilled when my best friend cleverly sent me an email about Krampus, Saint Nick’s devilish companion in Europe, who gets very very naughty children by beating them with sticks, filling their stockings with coal and throwing them in his sack (to be brought where, heavens knows). That night the screaming, wrestling, whining and fighting stopped, so you can guess who was introduced to the family Christmas tradition….

A bit severe? Well, the tradition of Krampus hails from Bavaria, where my Father-in-Law was born and raised, so I can argue that it is part in my children’s family heritage. Now, with the mention of one simple “K” word, my home is no longer a screaming pit of holiday nerves, but a harmonious Chipmunk-Christmas-playing-in-the background abode, that would make Martha Stewart proud. If only Krampus was around all year round…..

The word Krampus originates from the Old High German word for claw (Krampen). In the Alpine regions the Krampus is represented by an incubus in company of Saint Nicholas. Traditionally, young men dress up as the Krampus in the first two weeks of December, particularly in the evening of December 5, and roam the streets frightening children (and adults) with rusty chains and bells. In some rural areas the tradition also includes slight birching by the Krampus, especially of young females.

The present day Krampus costume consists of wooden masks or Larve, sheep’s skin and horns. Considerable effort goes into the manufacture of the hand-crafted masks, as many younger adults in rural communities engage competitively in the Krampus events.

In Oberstdorf, in the southwestern alpine part of Bavaria, the tradition of the “Wilde Mann” (wild man) is kept alive. He is described exactly like Krampus (except the horns), dressed in fur and frightening children (and adults) with rusty chains and bells.