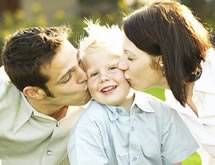 I have always believed that mental skills depend both on genetics and parenting. A recent article published on CBS News provides proof for the latter. It talks about a study conducted at the University of Oregon which focused on poor families. Here’s an excerpt from the news article:

They looked at measures of thinking skills in young children before and after parents had special counseling.

One of the researchers, Courtney Stevens, PhD, presented early results from the study today at the annual meeting of the American Association for the Advancement of Science in Boston.

Fourteen children aged 3-5 were tested on language ability and attention, and they had brain scans before their parents began the counseling. Another 14 children had the same tests, but their parents did not receive any special counseling.

The findings of the study?

Jeanne Brooks-Gunn, PhD, co-director of the Institute for Child and Family Policy at Columbia University in New York City, says the most helpful ways to even the odds for poor kids are preschool education and efforts to improve parenting practices. She says the policy institute she leads has “very specific recommendations on parenting practices,” which agree with what the Oregon researchers taught.

Though many of us probably know the importance of good parenting with regard to our children’s mental skills, it is still assuring to hear of scientific findings such as this one. I guess we don’t need any more motivation to practice good parenting, huh? What do you think?