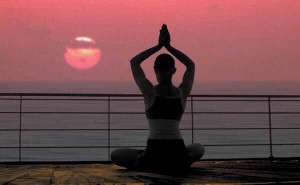 Before you burst out laughing and saying something about Yogi Bear, nope, it doesn’t have anything to do with him. Yogi parenting is something that I recently read about and it seems pretty interesting. Yogi is the noun used to refer to someone who practices yoga. So basically, yogi parenting is applying yoga principles to parenting.

I have heard of yoga so many times – my friends are so into it right now – but I have never really tried it for myself. When I read this article on yogi parenting, though, I started to have second thoughts. Maybe it is a good idea!

Amy Bertrand at StlToday writes about Suzanne Tucker, a yoga enthusiast, who is practicing yogi parenting:

“For me, yogi parenting is a way of being more than a thing you do, it’s a place to come from, an approach to parenting.”

That approach includes allowing your children to make mistakes to help them grow and being in the moment with them as much as possible.

“It’s about understanding the mind of a child,” Suzanne says. Yoga, with its breathing techniques and teaching you to be “present” in your mind, help with that.

For instance, when a child scrapes her knee, the parent’s natural reaction may be to say, “Oh, tell me what happened.” In yogi parenting you pull the child into the present and say, “Let me see it, let’s work on helping this now.”

“You bring that child into the present instead of letting them relive the past,” Suzanne says.

Though I am sure this is but a small part of the whole concept, it does make sense. What about you, have you heard of yogi parenting? What are your thoughts on this?